Which browser has the perfect Tab Snoozing / Sleeping / Freezing implementation?

Tab snoozing, also known as tab sleeping or freezing, is not a new feature, but it is getting added to more and more web browsers natively. The feature is designed to save resources, memory in particular, by unloading tabs and putting them to sleep. Unlike closing tabs, which removes the information from the tab bar, sleeping usually keeps the tab open in the tab bar but in an unloaded state. A click reloads the content so that the site’s content becomes accessible again.

Since tab snoozing is coming to more and more browsers, it may be interesting to see which have the best implementation at the time. Best needs to be defined, and in this case, we are focusing on usability. How much control do users have over the feature?

The implementation of the feature in browsers that support it

Google introduced Tab Freeze as an experiment in the company’s Chrome browser in 2019. It was not the company’s first try, as it introduced and removed a tab discard feature back in 2015 in the browser. Google removed the experiment, and it appears that tab freezing has been integrated in Chrome natively.

Tab Freezing is an automated feature that will unload tabs to free memory after five minutes of inactivity. Specifics, especially how the functionality is triggered, are unclear, other than that Chrome won’t freeze tabs that play media. The feature offers no user controls and the freezing happens automatically in the background after 5 minutes of inactivity.

Firefox supports an automatic tab discarding feature that works similarly to Google’s. It is not enabled by default, however, and needs to be enabled on about:config by changing the state of the preference browser.tabs.unloadOnLowMemory to TRUE.

Microsoft added the Sleeping Tabs feature to Microsoft Edge 87 in September 2020. The feature, experimental at the time, to give users options to free up resources by unloading background tabs.

Tab Sleeping needs to be enabled before the feature becomes available, and it supports an additional option to put background tabs into sleep mode immediately.

The browser paints tabs that are sleeping in a lighter gray text color to provide users with a visual indicator. Hovering over a tab displays a confirmation as well that a tab is sleeping.

Edge puts tabs to sleep after 2 hours of inactivity by default. You can change the time period and add sites to an exclusions list to prevent them from ever being put to sleep. 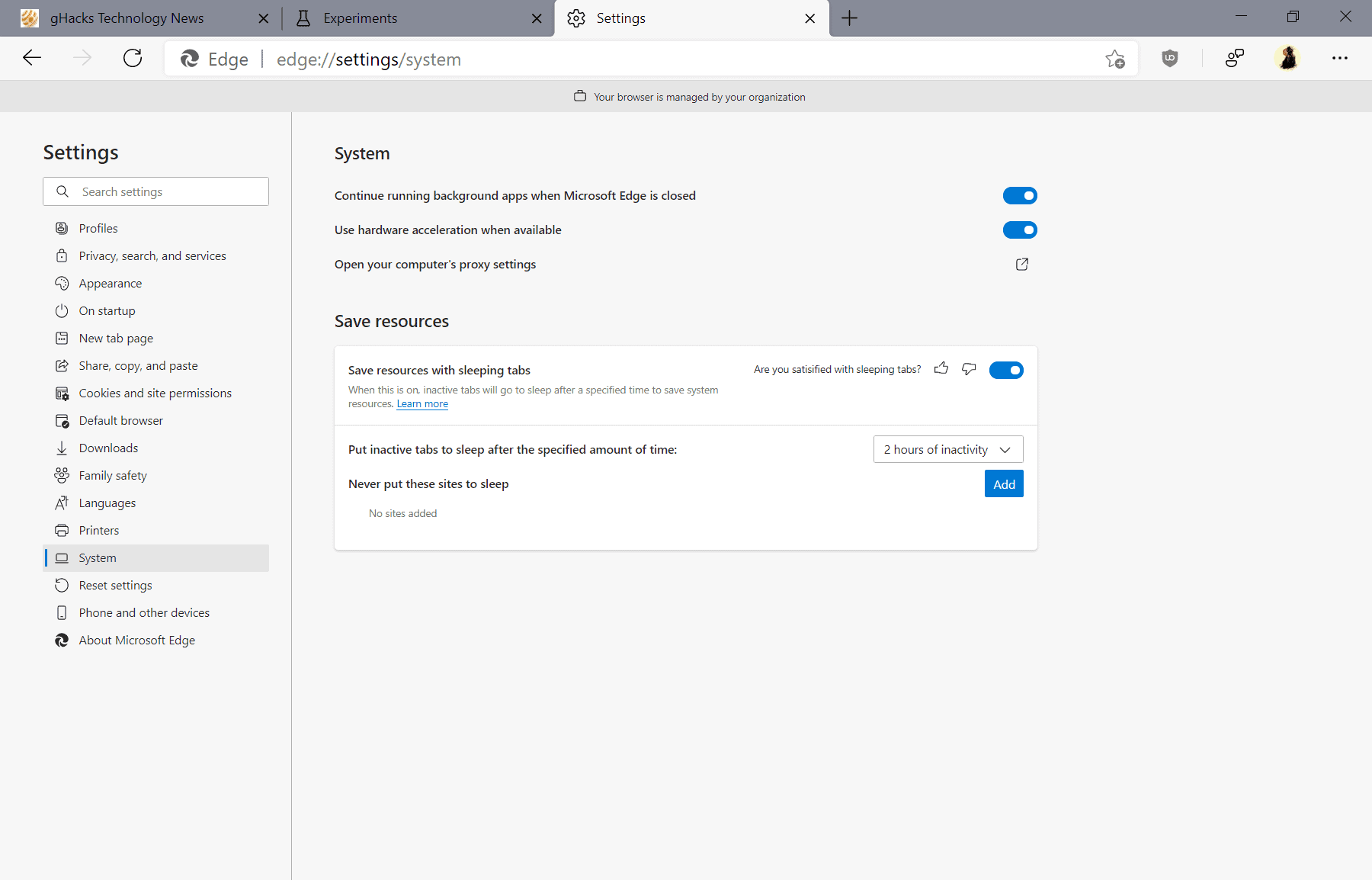 Just load edge://settings/system in the address bar to access the configuration options under “Save resources”. Note that you only see the options if you enabled the main Tab Sleeping experiment on edge://flags.

Opera Software introduced tab snoozing in Opera 74 (stable is at version 73 at the time of writing), spotted by Techdows. The feature is enabled by default, at least in the development builds it is available in. It is called Snooze inactive tabs to save memory and you can toggle it by loading opera://settings/vpn in the browser’s address bar, scrolling down to the user interface group on the page, and clicking on the feature listed there. The current implementation offers no settings or controls.

Microsoft’s Edge browser is the clear winner when it comes to tab freezing / sleeping functionality. It is the only browser that supports setting different intervals before the feature kicks in and a list of exclusions. A list of exclusions is essential, as tab unloading may interfere with certain sites or web applications.

Now You: what is your take on tab freezing features, either natively or by extensions?

Which browser has the best Tab Snoozing / Sleeping / Freezing implementation?

A look at the tab freezing, sleeping or snoozing features of popular desktop web browsers; which takes the cake and which does not?

Raz B: Marques Houston Is A Creep!!

Raz B: Marques Houston Is A Creep!!

Learn pages in a distraction-free mode, print or save them with the Reader View extension for Firefox and Chrome

Matt James’ The Bachelor: Girls Inform All Was So Boring – E! On-line

My Music Moments: Isaac Dunbar Shares the Soundtrack to His Life – E! On-line

Texas produces extra energy than some other state. This is why it went darkish anyway

What are the professionals and cons of Covid vaccine passports? | Coronavirus